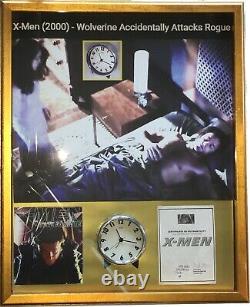 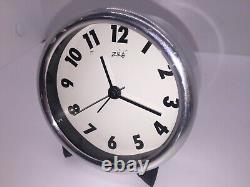 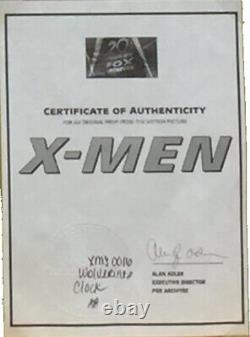 X-MEN (1st Movie - 2000) Screen-Used Original Prop WOLVERINE'S ALARM CLOCK w/20th Century Fox Certificate of Authenticity. WOLVERINE'S screen-used ALARM CLOCK from the first of 11 (to-date) X-Men movies. In X-Men (2000), Rogue and Wolverine are recruited onto the X-Men team. With Rogue very new to her powers and Wolverine seeking a home and others like him, it seems like a perfect place for them both to be. However, Logan is haunted by his past; while having a nightmare in Xavier's mansion, Rogue tries to help Logan by waking him up. He's so afraid and startled by her waking him up that he accidentally drives his claws through her, nearly killing her. She saves herself by draining his life force and healing abilities from him, but he nearly dies in the process of that, as well. The Original WOLVERINE'S ALARM CLOCK is clearly visible during this classic scene.

The ALARM CLOCK sits on Wolverine's night stand, just to his right, as Rogue awakens him from his nightmare. A 3 minute 17 second You Tube video of the scene may be found on line. Is displayed in a 16 inch x 20 inch shadow box (included - prop is easily removable from the shadow box) and is accompanied by its Certificate of Authenticity issued by 20th Century Fox, along with a 14 inch x 16 inch photo (frame) from the scene. We can provide additional photos of the prop ALARM CLOCK upon request by seriously interested, potential Buyers.