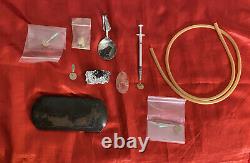 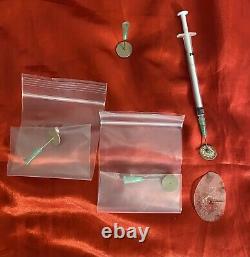 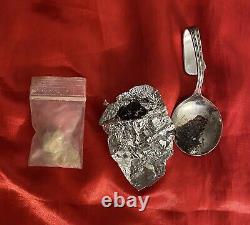 Offered here is an incredible find for any fan of the hit film The Suicide Squad or Academy Award Winner Taika Waititi! This is Ratcatcher's (Taika Waititi) Screen Used Prop Hype Kit from The Suicide Squad! This set includes Ratcatcher's. SFX Syringe with prop base. (NOTE: This is not a real syringe and custom modified to attach to a prop base to attach to Ratcatcher and give the appearance of an stabbed needle). Sfx adhesive that attached the prop syringe base to Taika Waititi. Three additional safety needles with connection bases. This was made for the tragic scene Ratcatcher 2 (Daniela Melchior) is telling her backstory and flashes back to when she discovers her father passed and takes up his legacy as Ratcatcher 2. Not many Props or Wardrobe items have surfaced from The Suicide Squad, especially pieces from Taika Waititi! Taika Waititi is an extremely respected filmmaker and actor!

Taika Waititi won the Oscar for Best Adapted Screenplay for his brilliant script for Jojo Rabbit which he also directed. Taika Waititi also directed Thor: Ragnarok, What We Do in the Shadow (both the film and several episodes of the series).

Taika Waititi recently created the acclaimed new series Reservation Dogs and is slated to write & direct several extremely anticipated films including Thor: Love and Thunder, the remake of Akira, the remake of Flash Gordon, An Oompa-Loompa spin-off series, and a new Star Wars film! If you want this great piece from a phenomenal entertainer act fast! Q: Was this item actually used in the film/show mentioned? Q: How was this acquired? A: This is an answer which varies from item to item.

To ensure a large variety of memorabilia these pieces were obtained through various trusted sources including studio/memorabilia auctions, set sales, crew members, etc. Q: Does this include a Certificate of Authenticity? Typically does not come with a Certificate. If a piece comes with a preexisting Certificate it will be directly mentioned in the listing.

If one does not a Pure Magic Memorabilia Certificate of Authenticity will be included for your personal records and piece of mind. Q: Are there ever multiples of the same prop/wardrobe item? Typically productions will have multiples of nearly every item. The amount however varies depending on how prevalent the item is and how hard it is used. Q: I'm specifically looking for something from ________ do you have anything you will be listing? A: If there is any particular Film, Show, or Celebrity you are looking for an item from feel free to ask. This item is in the category "Entertainment Memorabilia\Movie Memorabilia\Props\Originals". The seller is "puremagicmemorabilia" and is located in this country: US. This item can be shipped to United States.