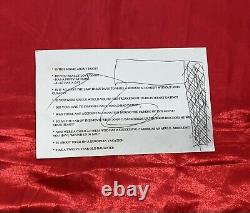 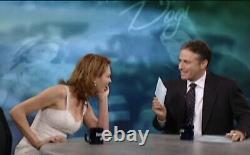 Offered here is a great find for any fan of the beloved series The Daily Show or cultural icon Jon Stewart! This is Jon Stewart's Screen Used Prop Interview Card from The Daily Show! This card can be seen when Jon Stewart is interviewing Diane Lane on his 7/26/2005 episode.

In addition to being used by Jon Stewart it appears Jon Stewart drew on this card while filming. Jon Stewart would frequently draw on papers throughout the Daily Show which he explained was to keep his brain busy and prevent boredom. Props and Wardrobe from The Daily Show are extremely rare, especially a piece from Jon Stewart himself. Jon Stewart is extremely influential and widely considered one of the greatest topical comedians ever. If you want this great piece act fast!

Q: Was this item actually used in the film/show mentioned? Q: How was this acquired? A: This is an answer which varies from item to item. To ensure a large variety of memorabilia these pieces were obtained through various trusted sources including studio/memorabilia auctions, set sales, crew members, etc.

Typically productions will have multiples of nearly every item. The amount however varies depending on how prevalent the item is and how hard it is used. Q: I'm specifically looking for something from ________ do you have anything you will be listing?

A: If there is any particular Film, Show, or Celebrity you are looking for an item from feel free to ask. This item is in the category "Entertainment Memorabilia\Television Memorabilia\Props\Originals". The seller is "puremagicmemorabilia" and is located in this country: US. This item can be shipped to United States.