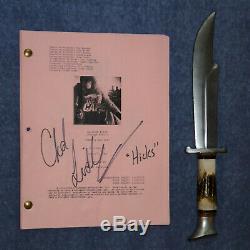 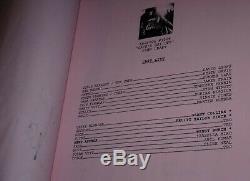 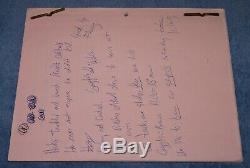 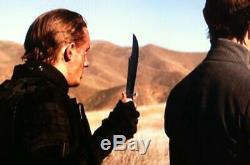 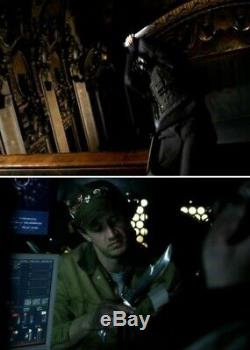 This is Chad Lindberg (Supernatural) rubber prop knife and his personal script from the "Goggles and Hicks" episode. Chad has autographed the front cover. It is NOT a pre-printed signature.

The Cape is an American superhero drama series, first shown on NBC during the 20102011 television season as a mid-season replacement. A two-hour pilot episode aired on Sunday, January 9, 2011.

The series, set in fictional Palm City, California, follows Vince Faraday, an honest detective who decides to leave the police force after he witnesses the murder of a new police chief by a mysterious villain known as Chess. Faraday accepts an offer to work for ARK, a private security firm owned and operated by billionaire entrepreneur Peter Fleming. ARK is petitioning Palm City to privatize the police and public safety operations. A video streamed to Faraday from an investigative blogger known only as Orwell leads him and partner, Marty Voyt, to a cargo train owned by Fleming's firm. They discover the train is smuggling implosive weapons of mass destruction (WMDs) inside children's toys. Voyt is corrupt and delivers Faraday to Chess, who reveals himself as Fleming. Fleming frames Faraday for the police chief's murder. In a news event staged by Fleming, Faraday is "revealed" as Chess as an ARK security team chases him along the city waterfront.

A tanker explosion causes Faraday's apparent death. Faraday is abducted by The Carnival of Crime, a traveling circus turned bank robbery ring, who later accept him as one of their own. Their ring leader, Max Malini, trains Faraday in circuscraft and in the use of a special cape made entirely from spider silk. While there is nothing magical about the cape, Malini shows Faraday how a talented illusionist can use it to simulate superhuman abilities, and promises to show Faraday the 26 unique effects of the cape.

Faraday decides to fight Palm City's corruption and clear his name by adopting the visage of his son's favorite comic book hero, The Cape. In the series finale, "Endgame", The Cape exposes ARK's corruption.

Fleming asserts that he is innocent. He paints Voyt, now the chief of his private police force, as a corrupting influence who has usurped daily control of ARK. Faraday's wife, Dana, prepares Voyt's legal defense and convinces him to turn state's evidence.

Fleming decides to eliminate both families before Voyt can testify. The Cape hides both families with the Circus, but Fleming's assassins find them. During the assault, Voyt sacrifices himself to save The Cape. As Voyt dies in The Cape's arms, Faraday reveals his identity and forgives Voyt's betrayal.

The series ends with Fleming still at large; Vince's family still believes him dead, but Orwell assures Dana that Vince still loves her, implying that he is still alive. David Lyons as Vincent "Vince" Faraday / The Cape A former soldier and an honest cop who is presumed both dead and a murderer by the residents of Palm City. He is constantly trying to prove that Peter Fleming is Chess, and becomes the Cape to help fight crime and corruption throughout the city. Faraday is an excellent investigator, and an above-average fighter before going into hiding, having had years of training and experience during his time in the army, which would later be expanded upon by the circus crafts he later learns from Max Malini during his training by the "Carnival of Crime".

He becomes proficient in boxing, wrestling, hypnosis, escapology, funambulism, stage illusions, and in some acrobatics, which help him duplicate the extraordinary powers of his comic namesake. These efforts are further aided by a unique cape given to him by Max Malini, which had been specifically designed for these illusions; (his training included emphasis on all thirty-seven illusions involving a cape). In addition to his attempts to clear his name, Faraday also uses the persona of "The Cape" to visit his son anonymously for short periods of time and give him hope. According to Faraday, the Faraday family have been in Law enforcement for generations. Keith David as Maxwell "Max" Malini The ringleader of a gang of circus-performers-turned-bank-robbers known as "The Carnival of Crime".

He mentors Vince after saving him and trains him to become the Cape. Despite being a criminal, who is willing to steal from good or bad people, he shows a strong knowledge of right from wrong, and abhors the use of killing, operating on what would appear to be a strong moral code. In "Razer", Max informs Ruvi that the real reason he's training Vince is because of someone called "Deveraux", (who Deveraux is has not been revealed). Summer Glau as Orwell An investigative blogger who wages war on the crime and corruption in Palm City, (her blogger moniker is a nod to George Orwell). She becomes Vince's ally and helps him, even though she is trying to keep her life and her reasons a secret and she is a skilled fighter.

During a hallucination in the episode "The Lich (Part 2)", it is revealed that Orwell's first name is "Jamie" and that she may harbor secret feelings for Vince. It is confirmed that she is the daughter of Peter Fleming, and hinted that he had done something to her mother. There have been hints in the final episode that she fears she is going down the same dark path as her father, due to his genes, starting with migraines, and hallucinations of an ominous white door.

She has not disclosed her true identity to Vince, and uses a number of aliases and disguises, posing as reporters, and continues to elude her father's attempts to find both her, and "Orwell" (believing them to be two separate people). James Frain as Peter Fleming / Chess The billionaire founder/CEO of Ark Industries and the Cape's nemesis. He is a criminal mastermind, serial killer, expert hand-to-hand combatant, and is skilled with firearms.

He is responsible for framing Vince for the murders. When appearing as his alter ego, Chess, Fleming's pupils appear as chess pieces, specifically a knight and a rook; it is revealed in the episode "Razer" that this change is made with contacts. He has an obsession with the game of chess, as he sees everything around him as merely a game, often using chess terminology in his speech. In "Scales", Fleming reveals he is a mechanical engineer.

It has been strongly implied that Fleming has multiple personality disorder, as he has had conversations with his Chess persona, who urges him to kill everyone. The Chess persona tends to emerge when Fleming is stressed or threatened, though as the series progresses he becomes stronger, coming to the surface without Fleming's consent. He is somewhat protective of Fleming and reawakens in Fleming's mind after several assassination attempts by Dice. In the episode "Kozmo", it is revealed that he was trained as a soldier in Iran. Jennifer Ferrin as Dana Faraday (née Thompson) Vince's wife, who believes her husband has died. She takes a job in the public defender's office so she can give others what Vince never got, a chance to prove their innocence in a court of law. Ryan Wynott as Trip Faraday Vince's son, who idolizes the Cape. Vince hopes the Cape will convince Trip that there are good people left in the world. Dorian Missick as Marty Voyt A secretly corrupt police detective and friend to Vince.

He is employed by Fleming because he fears for the safety of his own family. He continually visits the Faraday family to deliver more false "evidence" showing that Vince was really Chess. He was named as ARK's new Chief of Police in the episode "Goggles and Hicks".

In the episode "Endgame", when evidence implicates Fleming as'Chess', Fleming tries to frame Voyt as having been'Chess' all along (as he'd done with Vince Faraday). Dana Faraday manages to convince Voyt to turn state's evidence against Fleming/'Chess', but after an assassination attempt, The Cape is forced to publicly reveal himself to save Voyt's life and hide him and Voyt's family away, only for Voyt to be shot (taking a bullet for The Cape) and killed by Scales (on Fleming's orders to silence him) just as he and his family are leaving Palm City by train, but not before The Cape unmasks himself to Voyt, letting him know that he had survived. Martin Klebba as Rollo A dwarf who plays the role of strong man in Malini's circus gang.

He is a good fighter, as is proven when he first fights Vince and wins and later easily wins against Scales with a wrench. He is shown to have a crush on Orwell. The item "The Cape screen used prop rubber stunt knife signed script Chad/Ash SUPERNATURAL" is in sale since Tuesday, August 27, 2019.

This item is in the category "Entertainment Memorabilia\Television Memorabilia\Props\Originals". The seller is "mayday_props" and is located in Pasadena, Maryland. This item can be shipped worldwide.