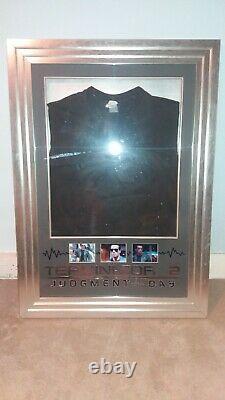 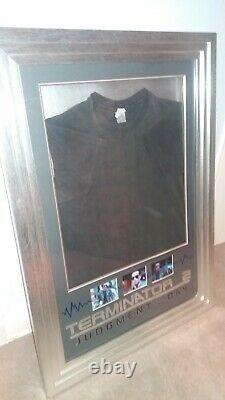 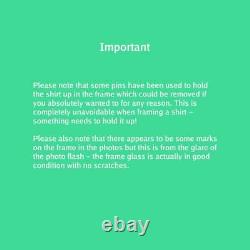 Here we have an incredible screen-used prop from arguably one of the best action films ever made - Terminator 2! Not only is it from Terminator 2 but it also appears in one of the opening scenes in the film which we all remember very well - when Arnie leaves the bar! Here is the exact text as described on the COA which details the scenes in which this shirt appeared. This black T-shirt was acquired for the production for use by Arnold Schwarzenegger as the T-800.

This shirt is a stage 1 for use from when he gets the outfit from the bar up until the Galleria when he is first shot. So, as you can see is described here - when Arnie goes into the bar naked and fights all the motorcyclists in the bar, THIS is the shirt he leaves the bar in after stealing it from one of the gang. This makes it an iconic piece of history! Screenshots of some of the scenes it was used in are pictured at the bottom of this beautiful frame.. It really does look as stunning as it appears in the photos and would look amazing hung anywhere in your home!

For any Terminator or Arnold Shwarzenegger fan, this is an absolute must-have! This item is in the category "Films & TV\Film Memorabilia\Other Film Memorabilia". The seller is "featherstone_antiques" and is located in this country: GB. This item can be shipped worldwide.