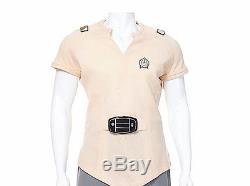 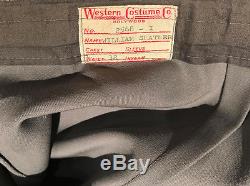 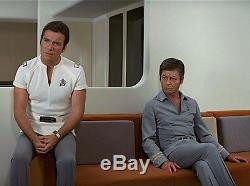 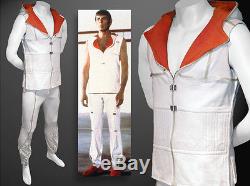 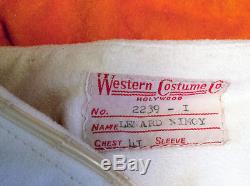 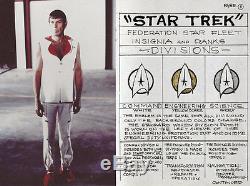 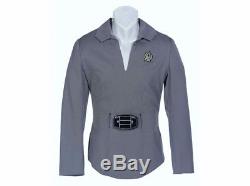 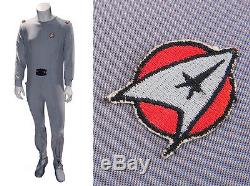 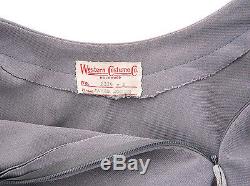 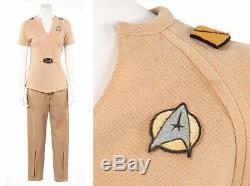 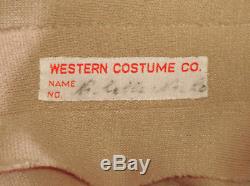 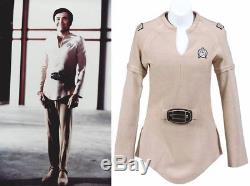 These costumes were just on permanent display at the DISNEYWORLD theme park in Florida for millions of people for the last few years. This truly is a once in a lifetime opportunity to own these. STAR TREK The Motion Picture (1979). HERO KIRK'S CLASS'B' STARFLEET UNIFORM.

This Starfleet uniform was custom-made by Western Costume Company for use by William Shatner as Captain James T. The instantly recognizable uniform consists of a tunic, with Starfleet insignia patch, sleeve rank braid and "Bio Monitor" belt detail included, but not attached, and a pair of pants with shoes attached. Both the tunic and pants feature original Western Costume Company labels with "William Shatner" typed on the information line. Wear from use is present otherwise the costume is in very good condition. McCOYS CLASS'A' STARFLEET UNIFORM.

A grey Class A officers shirt with collar, with green-background Starfleet insignia and a "Bio Monitor" which attaches to a velcro clasp. Western Costume label inside inscribed "Kelly De Forrest". Worn by Kelly reprising his role as Dr. McCoy in Star Trek: The Motion Picture.

HERO SPOCK'S SICKBAY TOGS. Costume worn under spacesuit and also in the sick bay of Star Trek: The Motion Picture by "Spock". The instantly recognizable uniform consists of a sleeveless shirt and seperate trousers. After mind-melding with the alien machine V'Ger, Spock recovers in sickbay.

Nimoy wears this during the pivotal emotional scene that changes the fate of the Enterprise and her crew. Sewn in Western Costumes Co.

Upon reprising his role as "Chekov" in Star Trek: The Motion Picture. The uniform is accompanied by Starfleet insignia patch and division shoulder rank decorations. Some expected usage, fading and wear to the pieces, otherwise item is in fine screen used condition for their age.

More information & photos can be seen at. When plans to launch a second Star Trek television series in the late 1970s were scrapped by Paramount Pictures, the show's creator, Gene Roddenberry, instead transformed the aborted program's 2-hour pilot into this big budget theatrical feature.

Five years after the legendary voyages of the starship Enterprise, James T. Is an unhappy, desk-bound admiral at Starfleet headquarters.

Kirk goes aboard his old vessel to observe its re-launch under new captain Will Decker. A mysterious, planet-sized energy force of enormous power is headed for Earth.

And the rest of his former colleagues, Kirk takes the Enterprise inside the massive energy cloud and discovers that it is the long-lost NASA space probe Voyager. Now a sentient being after accumulating centuries of knowledge in its deep space travels, the alien, which calls itself V'ger, has come home seeking its creator. I will do my best to arrange personal viewings.

Detailed photos of the items available upon request. Have a continued opportunity to visit it if they do not sell.

Please contact me directly with any offers regarding this. The item "Star Trek The Motion Picture Main cast screen used starfleet costumes" is in sale since Monday, August 28, 2017. This item is in the category "Entertainment Memorabilia\Movie Memorabilia\Wardrobe\Originals". The seller is "emmettsauction" and is located in Los Angeles, California. This item can be shipped to United States.