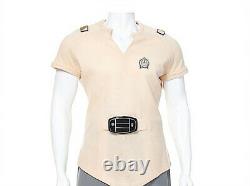 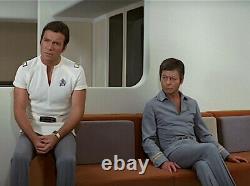 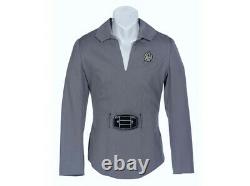 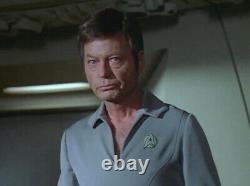 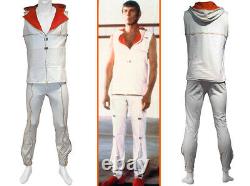 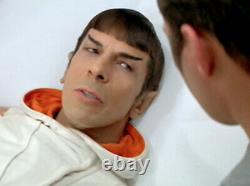 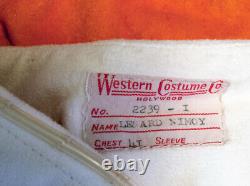 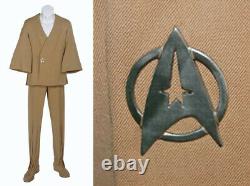 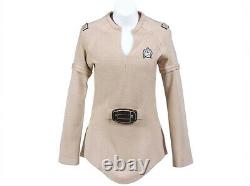 William Shatner's Class B Starfleet uniform worn as "Captain James Kirk", which is an instantly recognizable costume comprised of a tunic with Starfleet insignia patch, sleeve rank braid and Bio Monitor belt detail, and a pair of pants with shoes attached, both of which have interior Western Costume Company labels with "William Shatner" typed on the information line. Leonard Nimoy's Sickbay togs worn as "Spock", comprised of a sleeveless shirt and trousers with sewn in Western Costume Co. Tag reading "Leonard Nimoy", which were worn under his spacesuit as well as in the sickbay scene after mind-melding with the alien maching V'Ger, which is a pivotal emotional scene that changes the fate of the Enterprise and her crew. DeForest Kelley's Class A Starfleet officer's shirt worn as Dr.

Label inscribed "George Takei", along with a similarly labeled corresponding pair of trousers and a black zippered undershirt worn in the "Rec Deck" scene. McCoy were all loaned to Disney and exhibited at its "Great Movie Ride Lobby", and will come with a letter from Disney along with (5) loan condition reports from Disney. This is truly a "holy grail" for Star Trek collector, as it is a museum quality collection including costumes from all of the main characters from a film which started an iconic, multi-billion dollar film and television franchise. This collection WILL NOT be split up under any circumstances.

STAR TREK: THE MOTION PICTURE. When plans to launch a second Star Trek television series in the late 1970s were scrapped by Paramount Pictures, the show's creator, Gene Roddenberry, instead transformed the aborted program's 2-hour pilot into this big budget theatrical feature. Five years after the legendary voyages of the starship Enterprise, James T. Is an unhappy, desk-bound admiral at Starfleet headquarters. Kirk goes aboard his old vessel to observe its re-launch under new captain Will Decker.

A mysterious, planet-sized energy force of enormous power is headed for Earth. And the rest of his former colleagues, Kirk takes the Enterprise inside the massive energy cloud and discovers that it is the long-lost NASA space probe Voyager. Now a sentient being after accumulating centuries of knowledge in its deep space travels, the alien, which calls itself V'ger, has come home seeking its creator. Also very interested in loaning the iconic costumes to another venue/museum so the fans.

Have a continued opportunity to visit it if it does not sell. Please contact me directly with any offers regarding this. The item "Star Trek The Motion Picture Collection of (5) hero Screen Used Costumes STMP" is in sale since Wednesday, September 4, 2019.