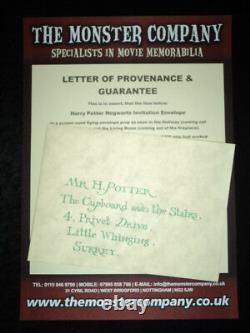 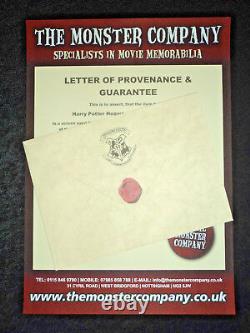 Potter, The Cupboard under the Stairs, 4, Privet Drive, Little Whinging, Surrey, as seen flying in the muggle front room / Hallway in Harry Potter And The Philosophers Stone a Warner Brothers movie named Harry Potter And The Sorcerer's Stone in the U. The envelope is a Hogwarts invitation and measures approximately 18.5cms by 13.5cms. The front address is in a medium green ink on a cream envelope with misty green veins (each one is uniquely individual because of the random veining).

The Hogwarts coat of arms is in black with a printed wax seal in a mix of reds upon the back. These were seen coming through the Hallway letter box, coming down the Chimney and flying about the front room in a great early cinematic scene. We believe only 1000 letters were made and re-used / reset for this scene after research and information from production assistants relating to this prop. This is an unbelievable opportunity to own a great prominent prop from the first Harry Potter film - The Philosophers Stone at a great price for a limited time whilst stocks last.

The Monster Company has 1,000's of items of TV and Movie merchandise online to include screen used film props to obsolete collectable toy lines. The item "SCREEN USED PROP HARRY POTTER & PHILOSOPHERS STONE HOGWARTS FLYING INVITATION" is in sale since Wednesday, June 9, 2021. This item is in the category "Films & TV\Film Memorabilia\Props\Original".