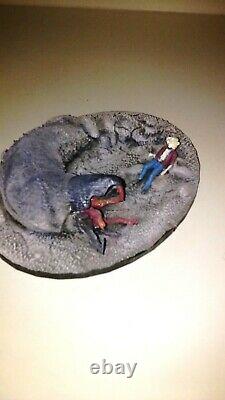 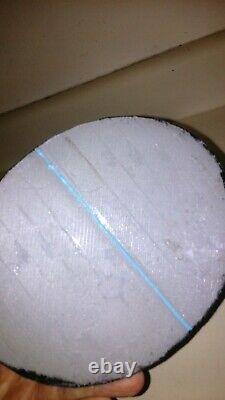 A HOLY GRAIL FOR TREMORS FANS. TREMORS has a HUGE cult following with 6 movies (likely 7) and a few tv shows/webseries. Screen used GRABOID FISH TANK DIORAMA with KEVIN BACONS character VALENTINE MCKEE from the failed 2018 TREMORS TV PILOT starring KEVIN BACON. THIS IS THE COOLEST ITEM IN THE ENTIRE COLLECTION. A miniature, detailed DIORAMA that went in the fish tank on the pilot.

It features VALENTINE MCKEE vs a Graboid. ONE OF A KIND, ONLY ONE IN EXISTENCE. A pilot tv Tremors show was made.

It wasnt picked up by the SYFY channel or anyone else so it appears to be scrapped. No one has seen it except for the. A trailer is on Youtube. I messaged the art director and he confirmed.

I also talked to the maker of these props. On the show someone (possibly Bacon) owns a tourist store in the town of Perfection.

This DIORAMA was one of the items that were in the store. The store has other GRABOID related items also that I have listed...

GIANT SNAKE/action figure/snow globe, etc. Definitely one of the coolest items Ive listed in my history.

Look at the pics, theres a pic of some Valentine Mckee bobble heads, these items Im listing are probably somewhere in that scene or close to those bobbleheads. It shows Mckee is trying to sell his likeness to make a fast buck. The item "Screen used FISH TANK GRABOID DIORAMA.