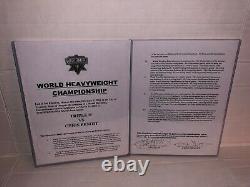 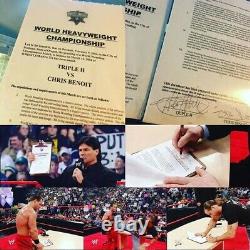 This piece is NOT a replica nor a copy. This is the real deal, 100% authentic, THEE actual contract that was screen-used on WWE Television on WWE Monday Night RAW on February 9th, 2004. The main event of WrestleMania was to be the then World Heavyweight Champion, Triple H -- defending the title against that year's winner of the Royal Rumble match, Chris Benoit.

Triple H signed his name on the contract, however, before Benoit could pen his name on the contract, Shawn Michaels would come out and interrupt the ceremony. Thus, this contract was signed by Triple H & Shawn Michaels the founding fathers of DX. Later that night, the then acting Co-GM of RAW, Stone Cold Steve Austin, stated at the end of the show, while he couldn't take Shawn Michaels out of the match because his name was now on the binding contract, he could add Chris Benoit in -- and thus the match at WrestleMania would become a Triple Threat Match for the Championship, and the rest is history. This is a literal HOLY GRAIL piece.

It does not come with a COA, however -- you can rest assure, it's completely and totally genuine! This piece was obtained from a production assistant who was with the WWE.

This is the last big wrestling piece I have in my collection. If you want a truly remarkable piece, look no further.

This incredible GEM is a MUST own item for all fans & collectors alike. Please see the photos in this listing, for the exact piece you'll receive, should you be the winner. I try to list new items daily, I will be listing thousands of vintage toys, collectibles & gems of all kinds, across many different fields of collecting/hobby wants & needs. I have literally something for every collector out there.

If anyone has any questions, feel free to contact me at any time. I will answer all inquiries in a timely manner. This item is in the category "Sports Mem, Cards & Fan Shop\Fan Apparel & Souvenirs\Wrestling". The seller is "icancu202" and is located in this country: US. This item can be shipped to United States.