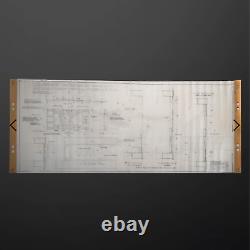 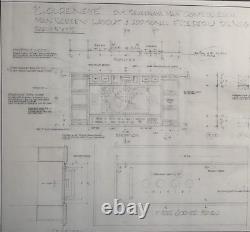 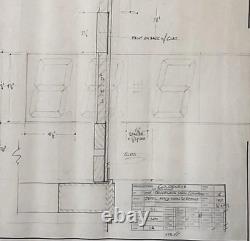 Goldeneye - Full-Size Architectural Construction Plan for Severnaya (Interior - Main Screen Layout & Additional FS Details). A production-used architectural blueprint for the multi-faceted Severnaya interior build featured in the much-loved James Bond classic, Goldeneye. Plans are drawn in pencil, and the sheet is marked 180 in black ink. It was issued on 04/10/1994, and details the construction plans for the INT Severnaya, Main Control Room - Main Screen Layout and additional FS details. The scale is 3/4 - 1' and FS.

On Goldeneye, Peter Lamont ran the Production Department, whilst Derek Meddings headed up the model unit, which constructed scale miniatures for certain exterior locations, including Severnaya, at Leavesden Studios in the UK. Severnaya is a fictional covert Siberia-based control centre for Goldeneye, a fearsome satellite weapon that lends its name to the film's title.

Crucially, Severnaya is also the location for the inciting incident that propels the narrative of the movie. Goldeneye is a landmark film in the James Bond franchise, returning the gentleman super-spy to cinema screens after an enforced six-year hiatus caused by long-running legal disputes. Audiences had spoken - James Bond was still as popular and compelling, as he had always been. Goldeneye proved to be the golden ticket.

The historic production artwork is very large in scale. This item comes with a Certificate of Authenticity.

This item is in the category "Films & TV\Film Memorabilia\Props\Original". The seller is "kudosmemorabilialimited" and is located in this country: GB.