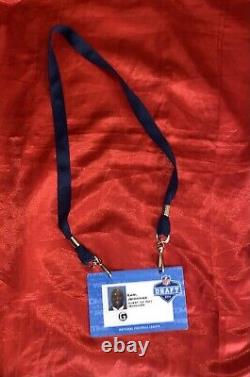 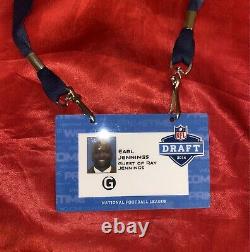 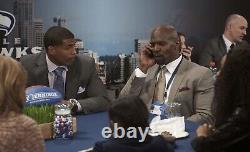 This is a cool find! Props and Wardrobe from Draft Day are getting harder to find, especially pieces from Terry Crews.

Terry Crews is one of the most popular actors in Hollywood with a great resume including Idiocracy, Brooklyn Nine-Nine, The Expendables Trilogy, Everybody Hates Chris, Cloudy with a Chance of Meatballs 2, White Chicks, Mailbu's Most Wanted, Starsky & Hutch, The Longest Yard, Bridesmaids, Arrested Development, Blended, Sorry to Bother You, Deadpool 2, Tales of the Walking Dead, and numerous other great films and shows! This would look fantastic framed with a still from the film. Q: Was this item actually used in the film/show mentioned? Q: How was this acquired? A: This is an answer which varies from item to item.

To ensure a large variety of memorabilia these pieces were obtained through various trusted sources including studio/memorabilia auctions, set sales, crew members, etc. Q: Does this include a Certificate of Authenticity?

Typically does not come with a Certificate. If a piece comes with a preexisting Certificate it will be directly mentioned in the listing.

If one does not a Pure Magic Memorabilia Certificate of Authenticity will be included for your personal records and piece of mind. Q: Are there ever multiples of the same prop/wardrobe item? Typically productions will have multiples of nearly every item.

The amount however varies depending on how prevalent the item is and how hard it is used. Q: I'm specifically looking for something from ________ do you have anything you will be listing? A: If there is any particular Film, Show, or Celebrity you are looking for an item from feel free to ask. This item is in the category "Entertainment Memorabilia\Movie Memorabilia\Props\Originals".

The seller is "puremagicmemorabilia" and is located in this country: US. This item can be shipped to United States.