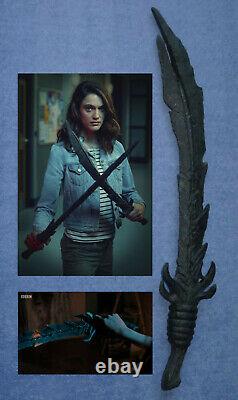 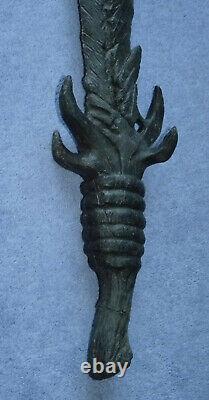 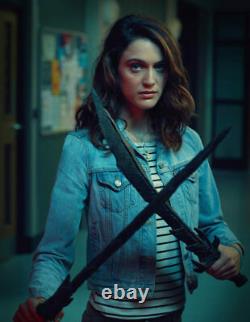 This is a screen used Shadow Kin sword from the WHO spin-off series "CLASS". Very thick rubber about 28 inches long with internal metal support rod. Would make a great addition to any monster / alien collection!!! CLASS is a British science fiction drama program, and a spin off of the long running program Doctor Who. It was created and written by Patrick Ness, who also produced alongside Doctor Who show runner and lead writer Steven Moffat, and Brian Minchin, who acted as producer on Doctor Who and two of its previous spin-offs, Torchwood and The Sarah Jane Adventures.

Series of eight episodes was released on BBC Three between October 22 and December 03, 2016. The story focuses on five of the students and staff at Coal Hill Academy, a longtime recurrent location of Doctor Who, who are tasked by the Doctor to deal with alien threats while trying to deal with their personal lives. Series received generally positive reviews from critics, with praise for its darker tone, writing, themes, characters, and acting. However, the series scored poor viewership figures for its broadcast on BBC One. In September 2017 BBC Three confirmed that the series was cancelled. In 2018 Big Finish Productions produced a series of six Class audio adventures, telling the further adventures of the students at Coal Hill Academy. Six more audio adventures were announced for release starting in April 2020 with 2 of the main characters being recast. The item "CLASS Doctor Who screen used prop Shadow Kin alien RUBBER STUNT SWORD Dr Who BBC" is in sale since Wednesday, June 16, 2021. This item is in the category "Entertainment Memorabilia\Television Memorabilia\Props\Originals".