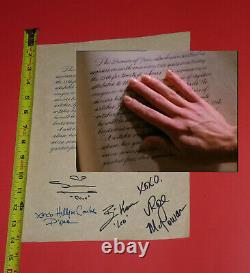 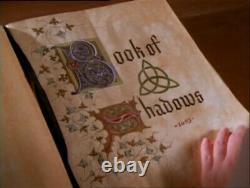 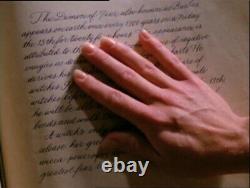 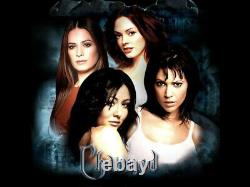 Original screen used Book of Shadows page seen in the episode "From Fear to Eternity" from season one. Autographed by Holly Marie Combs and Brian Krause on April 28, 2012 at Chiller Con in Parsippany, New Jersey. Autographed by Rose McGowan on September 01, 2012 at Dragon Con in Atlanta, Georgia. Autographed by Shannen Doherty on April 16, 2016 at Steel City Con in Monroeville, Pennsylvania.

Alyssa Milano needs to sign this!!!!!!!!! Years ago I acquired over 1000 pieces from the show. All direct from one of the show's prop masters. Many were auctioned off via ScreenUsed & Propstore. Only a few props & such remain. Please see my other listings. Genuine piece of the show's history right here! Charmed is an American supernatural fantasy drama television series created by Constance M. Burge and produced by Aaron Spelling and his production company Spelling Television, with Brad Kern serving as show runner. The series was originally broadcast by The WB for eight seasons from October 7, 1998, until May 21, 2006. The series narrative follows a trio of sisters, known as The Charmed Ones, the most powerful good witches of all time, who use their combined "Power of Three" to protect innocent lives from evil beings such as demons and warlocks. Each sister possesses unique magical powers that grow and evolve, while they attempt to maintain normal lives in modern-day San Francisco.

Keeping their supernatural identities separate and secret from their ordinary lives often becomes a challenge for them, with the exposure of magic having far-reaching consequences on their various relationships and resulting in a number of police and FBI investigations throughout the series. The series initially focuses on the three Halliwell sisters, Prue (Shannen Doherty), Piper (Holly Marie Combs), and Phoebe (Alyssa Milano). Following Prue's death in the third-season finale, their long-lost half sister Paige Matthews (Rose McGowan) assumes her place within the "Power of Three" from season four onward. Charmed achieved a cult following and popularity on The WB with its first episode "Something Wicca This Way Comes" garnering 7.7 million viewers, breaking the record for the network's highest-rated debut episode.

The show's ratings, although smaller than rival shows on the "big four" networks (ABC, CBS, NBC, and Fox), were a success for the relatively new and smaller WB network. Charmed went through several timeslot changes during its eight-season run. At 178 episodes, Charmed was the second-longest drama broadcast by The WB, behind 7th Heaven. In 2006, it became the longest running hour-long television series featuring all female leads, before being surpassed by Desperate Housewives in 2012. The series has also received numerous awards and nominations.

In 2010, The Huffington Post and AOL TV ranked Charmed within their joint list of "The Top 20 Magic/Supernatural Shows of All Time, " while in 2013, TV Guide listed the series as one of The 60 Greatest Sci-Fi Shows of All Time. Charmed has also become a source of pop culture references in film and television and has influenced other succeeding television series in the same sub-genre.

The show's success has led to its development in other media, including a video game, board games, soundtracks, novels, and a comic book series which served as a continuation of its narrative. According to data research from The NPD Group in 2012, Charmed was the second-most binge watched television series on subscription video-on-demand services, such as Netflix. A reboot series of Charmed, featuring different cast members and characters, premiered on The CW on October 14, 2018. The item "Charmed original screen used prop Book of Shadows page Autograph Autographed TV" is in sale since Thursday, May 13, 2021. This item is in the category "Entertainment Memorabilia\Television Memorabilia\Props\Originals".