Beauty & the Beast / History of the World Screen-used Matte Paintings 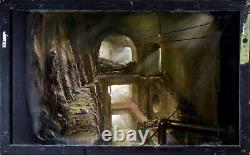 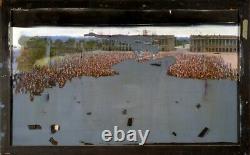 This is a rare double-sided matte painting by renowned visual effects matte artist Syd Dutton. On one side it includes a screen-used matte painting from the television series "Beauty and the Beast" (1989). On the other side, it includes a screen-used matte painting from the film "History of the World" (1982). These paintings share a 57" x 34.5" sheet of glass in a pine frame that is located in Los Angeles, California. "Beauty and the Beast" (1989). This painting established an underground gallery seen in several important episodes. It features scratch away areas created to backlight, through the glass, six painted hanging bulbs. Linda Hamilton and Ron Perlman appeared in the live-action area for the pilot episode. The artist later painted in the matte area to create a full painting. "History of the World" (1982). This matte painting established the courtyard of Place de la Révolution, formerly Place Louis XV, during the execution by guillotine of King Louis XVI (played by Mel Brooks) in a comic case of mistaken identity. Just as one of the characters shouts, Only a miracle can save him! Josephus (played by Gregory Hines) arrives with Miracle, a white horse pulling a Roman chariot. Additional exposures were made on the same original negative to extend the crowds in the scene as the two characters, and Miracle, escape from the palace grounds.

This painting was significantly altered to support backlighting for a later matte painting on its reverse. Contact information can be provided.

Thank you for you interest in this unique film and television memorabilia! This item is in the category "Entertainment Memorabilia\Movie Memorabilia\Props\Originals". The seller is "chairwolfsr" and is located in this country: US. This item can be shipped to United States.