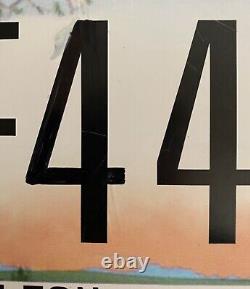 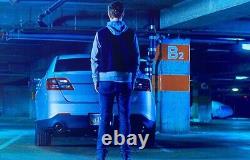 Offered here is a fantastic find for any fan of the Edgar Wright's masterpiece Baby Driver! This is Baby's (Ansel Elgort) Screen Used Prop License Plate from the film. This plate was custom made for production of the film. What makes this plate extremely cool is that it was used on two of the getaway cars in the film.

This was first used on the Green Toyota Carolla in the opening heist when Darling (Eiza Gonzalez) drives Baby, Buddy (Jon Hamm), and Griff (Jon Bernthal) back to Doc's (Kevin Spacey) after the heist. This was later used on the Silver Ford Taurus that Baby drives with Bats (Jamie Foxx) back to Doc's hideout. This is also the car that baby has destroyed at the impound lot to fulfill his debt to Doc. When this was used for the second time on the Ford Taurus the art department slightly changed the plate from 7BF147 to 7RF447. If you look closely you can see where the 1 was change to a 4.

The B's change to an R was less subtle and it appears they have additionally corrected that in post. However if you look closely in the film there is a slight difference in color at the bottom of the R where it was corrected. A license plate is the perfect piece to represent the film and would make an excellent display. Ansel Elgort is one of the most popular actors of his generation with a great resume including The Fault in Our Stars, The Divergent Series, Carrie, The Goldfinch. West Side Story, Tokyo Vice.

And numerous other great films and shows! Q: Was this item actually used in the film/show mentioned? Q: How was this acquired? A: This is an answer which varies from item to item.

To ensure a large variety of memorabilia these pieces were obtained through various trusted sources including studio/memorabilia auctions, set sales, crew members, etc. Q: Does this include a Certificate of Authenticity? Typically does not come with a Certificate. If a piece comes with a preexisting Certificate it will be directly mentioned in the listing.

If one does not a Pure Magic Memorabilia Certificate of Authenticity will be included for your personal records and piece of mind. Q: Are there ever multiples of the same prop/wardrobe item? Typically productions will have multiples of nearly every item.

The amount however varies depending on how prevalent the item is and how hard it is used. Q: I'm specifically looking for something from ________ do you have anything you will be listing? A: If there is any particular Film, Show, or Celebrity you are looking for an item from feel free to ask.

This item is in the category "Entertainment Memorabilia\Movie Memorabilia\Props\Originals". The seller is "puremagicmemorabilia" and is located in this country: US. This item can be shipped to United States.