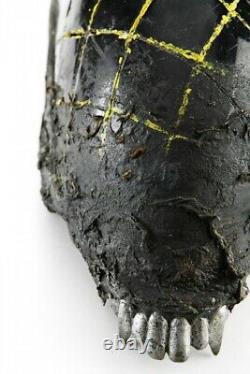 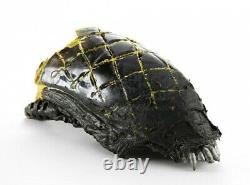 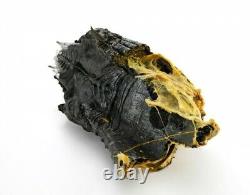 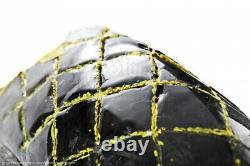 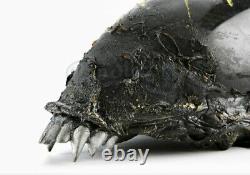 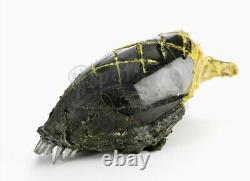 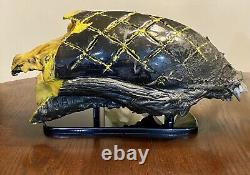 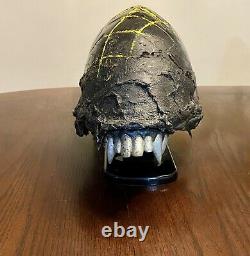 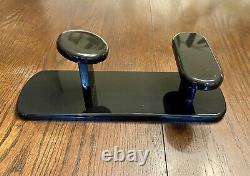 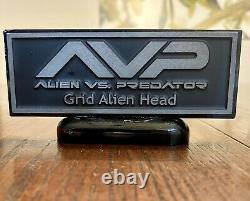 Alien vs Predator screen used movie prop partial Grid alien head. Grid was an Xenomorph alien that acted as the alpha of the Xenomorphs.

Grid was responsible for killing the Yautja Chopper and Celtic, who had come to the Pyramid to hunt Xenomorphs as part of an initiation hunt, and also helped to free the Queen held captive by the Predators deep within the pyramid. Grid was the star alien who showed intelligence and was one of the best Xenomorphs ever created. This is a partial Grid alien warrior head seen in the sci-fi movie Alien vs. This instantly recognizable piece was created specifically for the scenes with the Alien that was scarred by a tightening net as he struggles to break free, digging a grid-pattern scar into the elongated skull. The head, which is only the top front section, is made of foam rubber painted black and silver with the grid-shaped top piece composed of thin black plastic and even includes the silver top teeth.

The head was crafted to appear severely damaged and does not include the rear top half. There is a large section on top which has been painted yellow, as well as dried yellow "Alien blood" on the grid sections, to resemble the warrior's blood. The production-distressed head measures approximately 17 x 6 (43cm x 15cm) and remains in good condition.

This piece will come with a Propstore coa and a signed letter of authenticity from Amalgamated Dynamics, Inc. Co-founders Alec Gillis and Tom Woodruff, Jr. Also included will be a custom display stand and a name description plate. The item "Alien vs Predator screen used movie prop partial Grid alien head" is in sale since Tuesday, August 10, 2021. This item is in the category "Entertainment Memorabilia\Movie Memorabilia\Props\Originals".

The seller is "collectcollectible" and is located in Fort Lauderdale, Florida. This item can be shipped worldwide.