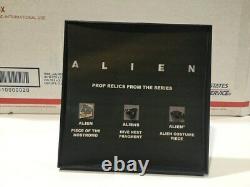 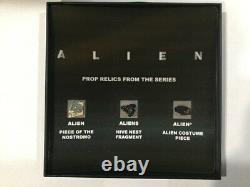 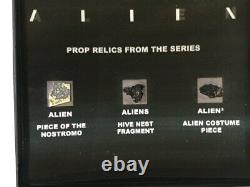 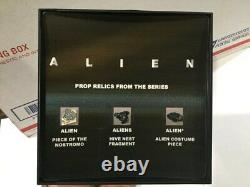 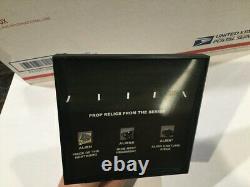 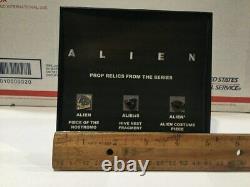 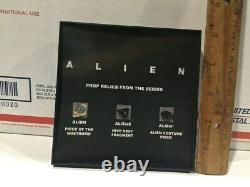 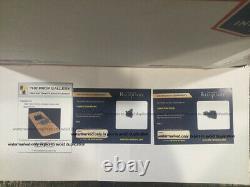 This is a framed display containing movie prop pieces from the original 3 Alien films. The display measures 5" x 5" and is protected behind a glass panel. The pieces are adhered to an exclusive lenticular card that displays/blinks the title "Alien" when in direct light, with a starry space background that slightly changes with the light as well (though this effect is hard to photograph).

A piece of the Nostromo from ALIEN (1979). A plastic piece painted in the rustic and metallic hues the Nostromo is known for. This is a piece specifically taken from a panel that was once attached to the large scale Nostromo landing leg seen in the film. The panel was made of a particularly brittle vintage plastic, which broke during transit. As such, this Nostromo fragment was obtained and offered here.

Comes with a COPY of the C. A from the highly trusted prop company, The Prop Gallery. A piece of the Hive/Nest from ALIENS (1986). Specifically from the scene where Ripley torches the nest, this was left over from the set after filming. As the nest piece was made of a brittle foam, the piece has been treated with a plastic-like sealant that ensure that it will never fall apart in your possession. Comes with the ORIGINAL hand signed certificate from the very trusted prop company, The Movie Reliquary.

A piece of the actual Alien costume from ALIEN 3 (1992). This piece was removed from a costume section used in the film, which had to undergo restoration due to age. This was a piece that was unusable for restoration. As this was a fragile piece of foam rubber, the piece was coated with a plastic-like sealant. Comes with the ORIGINAL hand signed certificate of authenticity from The Movie Reliquary.

Authentic Alien movie props are notoriously hard to obtain, let alone an exclusive collection like this. And as always, ask questions.

The seller is "realreelprops" and is located in Montebello, California. This item can be shipped worldwide.